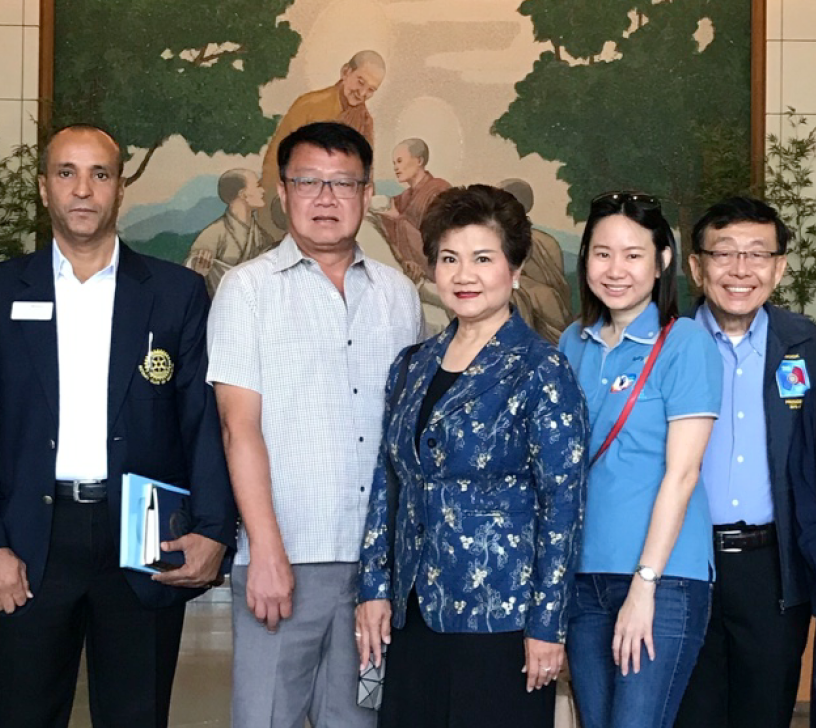 Thanks to the special arrangement by President Merlin of the Rotary Club of Taipei South World, whose elder brother is the head of the Tzu Chi Foundation in Canada, we were received warmly as the VIP guests of the Taipei Chapter of the Foundation at the Tzu Chi General Hospital in Taipei. Our host was Mr. Alex Lai, who runs a consulting firm and is a volunteer at the hospital, where unpaid volunteers outnumbered salaried staff. Mr. Lai speaks fluent Thai, being a student at Sahakoon School for 8 years in Bangkok when his father opened a ceramic factory in Thailand. He is on duty each time when Thai medical and government officials visit the hospital.

The purpose of the visit was to study how the foundation recycles waste plastic bottles into various products, as well as learning the palliative care being given to patients at the hospital. We were informed that Taiwan Ministry of Public Health regulates that all hospitals, private and public, charge the same rates.

We were shown the palliative care units in the hospital, where there are rooms for patients’ relatives who are Buddhists, Christians, and Muslims to pray, plus a Lotus Heart Room for placing a deceased body for relatives to pray for 8 hours. The period is for relatives’ mourning, and they would be relieved from their bereavement of their lost ones. There have been five Thai hospitals that are interested in providing such Lotus Heart room after visiting the Tzu Chi Hospital.

When we asked Khun Alex how I could make donations, the answer was no donation is accepted, “but you can buy products from the souvenir stores.” So we spent over $NT60,000 on blankets, a pair of shoes soles, a suit jacket, a blouse, a pair of sunglasses, a solar-powered cap with nightlight and taillight, etc. All the items are made from recycled plastic bottles!!!!!!

After spending over NT$60,000 there, PP Chamnong realized that the SET Index shot up 30.81 that afternoon! Dr. Lalita told him he got the merchandises for free, plus some pocket money from the shopping spree!

We were also taken to see the recycling facility near the hospital where the volunteer grannies classify waste materials for sales. They are in their 70s and 80s from well-to-do families, whose grown-up children are already grannies themselves! They work there every day as volunteers to keep themselves busy and make their lives worthwhile for the society and the future generations.

One grandma carefully used a pair of scissors to cut recycled A4 paper to separate the white parts from the inked areas, because the two parts are sold at different prices. An 87-yr-old grandma was seen arranging newspapers into hundreds of stacks that look like newly-printed dailies from the press!

Before leaving the hospital, we were extremely blessed with a very rare opportunity to have a brief audience with the 81-year old Reverend Cheng Yen, founder of the Buddhist Compassion Relief Tzu Chi Foundation, who only visits Taipei twice a year. On our visit that day, she was there! We were lined up in the front row, opposite the line of the hospital director and his administrative team, at the hospital entrance to receive the Reverend. Our members were ushered to follow and she turned to receive PP Chamnong’s paying respect in the Buddhist tradition, i.e., prostrating to offer the Reverend with “Krab” three times. The Reverend thanked us for coming from Thailand and invited us to have dinner at the hospital, giving us gold coins and blessed us before she led the crowd inside the hospital. The event was covered by a TV station camera.

After leaving Taipei, PE Pornchai, his Rotary Anne Seefoon, Dr. Lalita and PP Chamnong visited the headquarters of the Tzu Chi Foundation in Hualien, some 3 hours by driving. The Reverend Cheng Yen built the abode in that formerly remote area populated by the sick and the poor half a century ago when she started the charity mission. No Buddha statue in the charity movement is seen in the sitting positions, because priests have to help the sick and the poor. We were received at the HQ by Annie, a novice who grew up in California where her parents run a canned fruit business. After 12 years of education, she came to work for 8 years as a volunteer at Tzu Chi. Now she’s been a novice for nearly 2 years, awaiting to be ordained as a Bhikkhuni by the Reverend Cheng Yen.